It's Always Interesting To Do New Things

When it comes to the flow of our Sundays, Hubby Tony and I are pretty predictable. We've either gone to mass on Saturday night (which means we're free to do some type of adventure Sunday morning), or attend the 9 am Sunday mass (and take the time to socialize afterwards, getting home in time for an early lunch).

Today, though, we mixed it up. The parish Hispanic community was celebrating the Peruvian holiday of El Señor de Los Milagros (The Lord of the Miracles) at the 1 pm Mass, with food and music after. Everyone in the parish was invited; Tony and I decided to go.

I was unfamiliar with the day, but Tripsavvy told me:

In the mid-17th century, Angolan slaves painted an image of a crucified Christ on the walls of their meeting place in Lima. When an earthquake devastated the city in 1655, the mural was one of the few things left standing. Talk of a miracle spread throughout the parish, and Lima’s faithful came to worship the image, now dubbed El Señor de los Milagros.

Today, the image is the focal point for the largest religious congregation in South America. Processions begin early in the month, with major processions normally held on October 18, 19 and 28. Purple-robed devotees follow the image on its course through the streets of Lima, which themselves are draped in purple.

Tony and I decided not to worry about the suggested color dress code. We arrived ten minutes early. The courtyard was a sea of purple and I started to regret my decision. (However, there eventually ended up being plenty of people who had on alternate colors.)

A couple of minutes before 1 pm we were directed to move over to the far end of the building, where a tapestry with a replica of the painting was hanging. The priest took the tapestry, held it up high, and began a procession into the building. Immediately behind him came then deacon, then six men arranged in two rows, each wearing deep purple robes. The rest of the group fell into the back of the line. 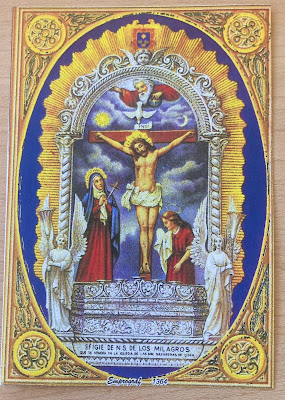 Once inside the church everyone found their place and the Mass began. A liturgical band added lovely Peruvian music. I don't understand Spanish, but I still enjoyed hearing the prayers from a different point of view. During the spoken prayers I participated by saying the English words in my head.

After the Mass was over everyone moved to the parish center. Tony and I sat at a table with a woman from the Hispanic community and her two children. We went through the buffet line and got a plate of flavorful rice mixed with chunks of chicken and topped with some fresh spinach. After the meal we went back for dessert-a slice of cake and the puff pastry dessert I call elephant ears. However, I learned that in Peru they're orejitas de chancho (pig ears).