Hubby Tony had a dinner meeting, so I decided it would be a nice night to treat myself to a meal out.


Mid-afternoon, after I fed Jackson the cat and enjoyed my coffee and crossword puzzle time I left the house to run several errands. After popping into three stores I ended up at a large ethnic grocery, where the goal was to replenish my supply of herbal tea. (Based on my experience, ethnic markets tend to have better selections and prices than the conventional groceries.)

Although it was only 4 pm, as I walked into the grocery store I realized I was hungry. That's a bad idea in a place that has aisles dedicated to all different parts of the world, but I decided to grin and bear it. The tea selection is right across from the produce section, to the right after you enter the store. Sure enough, I found a Polish brand that sounded good and bought two boxes - multifruit and  rose hip.

Picking out the tea only took five minutes, but by now my stomach was starting to growl. My plan to go out to dinner morphed into buying something at the store and cooking it when I got home. I walked up one frozen food aisle and down the other. In the Indian section I saw some interesting-looking wraps. I compared the different varieties and settled on this one 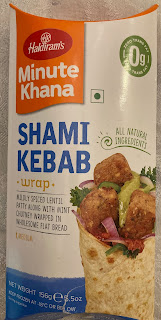 The packaging described the contents as a 'Mildly spiced lentil patty along with mint chutney wrapped in wholesome flat bread'. Its size and shape led me to believe it would be similar to a frozen burrito. At $2.49 the price was right and I tossed it into my bag. With the main dish decided, I walked back to the produce section and found a small head of leaf lettuce to make a salad. All of a sudden had the start of a meal.

It was still too early for dinner when I got home. I took chickpeas out of the freezer, thawed them in the microwave, and made a batch of hummus. Most of it went into the refrigerator, but I spooned some into a bowl and scarfed it down to take the edge off my hunger. I finished some paperwork, then washed and chopped the lettuce, dressed it, and nuked the kebab.  The whole production took less than five minutes.

My Indian burrito prediction was pretty on the money, but the lentil patty had a nice spice to it. Between my before-meal snack, the wrap, the salad, and a large handful of grapes for dessert I was full enough.