Getting Things Done At 10 Miles Per Hour

Right now the temperature is more like mid-May than early April. We opened all the windows, and last night at bedtime I turned on the ceiling fan for the first time since last summer. When I woke up this morning it was already in the mid-60s, and on the way to a high temperature of 80 degrees.

I had three errands to run and decided to combine getting them done with getting some exercise by riding my bike. After rolling out of bed I pulled on shorts and a tee shirt instead of showering. After breakfast and computer paperwork I gathered my supplies and threw on my backpack. On the way out the door I said goodbye to Hubby Tony, who had his own list of To-Dos for the morning.

First up was voting. All my ballots last year were submitted by mail, and I was excited to do it in person. Last year they implemented a system that lets you visit any polling place in the County. A couple of weeks ago I received a sample ballot in the mail. On the back it had a list of the four closest polling places to my house. The one I chose was three miles away, at the far end of the range, but convenient to my other errands. 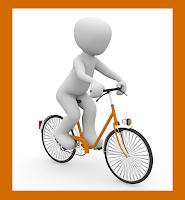 I caught the tail end of rush hour, and traffic was a little heavy. It took me a half hour to ride to the polling place in an elementary school. When I pulled into the parking lot it was loaded with cars and buses dropping off students. The voting line was filled with parents, but moved quickly. The ballot had a school bond issue, school board elections, and some sewer district measures. I had figured out my options ahead of time, quickly filled out my selections, and I was out in 15 minutes.

After voting I rode to the grocery store to pick up a couple of ingredients for dinner. The cashier asked if I wanted paper or plastic for my items; I said 'neither'. She placed my things at the end of the counter, where I picked them up and stuffed them into my backpack.All except for the banana that I ate outside before I put my bike helmet back on and left.

My last stop involved a little backtracking to get to a branch of my bank. This location has both a walk-up and a drive through ATM. There were no cars waiting to conduct business, so no one to complain when I rode my bike through the line. I completed my deposit quickly and was on my way again. The trip home was uneventful, and I pulled into the garage about 90 minutes after I left.