According to my sources, today is World Emoji Day. The designation was made because the first calendar emoji (an Apple version) showcases the date. You'll also find the date on the Google Calendar emoji. 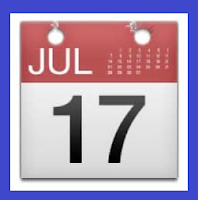 The website offered suggested ways to celebrate the day, but the one I liked the best was to describe your day using emojis. I found a website called emoji-translate that converted text and started typing:


This morning after breakfast I cleaned the kitchen, then gathered my things for the day and headed to the gym. After the gym I went to the bank to get some information about opening a new account, then headed to a restaurant where I bought myself lunch. On the way home from the restaurant I made two stops, which finished my list of errands.

Once at home I showered, then did some job paperwork, drank a cup of coffee, fed the cats, and cleaned their litter box. Dinner was leftovers from last night, so when Hubby Tony texted to tell me he was on his way home after work all I had to do was heat up the container of soup.

While we were eating the sky grew dark. I checked the weather app on my phone and discovered a large storm was moving into the area. Soon we had to turn on lights, even though it was only 6 PM. Once it started, it took about 45 minutes for the torrential rain to stop. News sources said there were thousands of people without power in the area, and I was thankful everything was fine at our house. 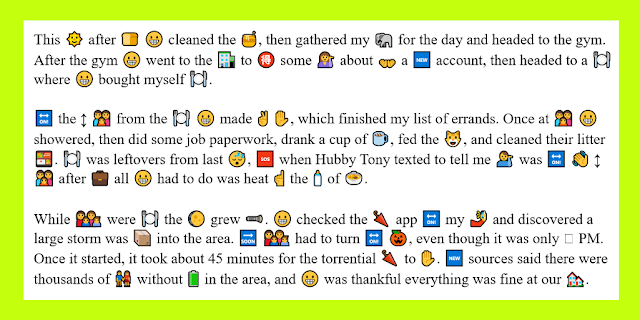