At this time of year Mother Nature is busy producing new vegetation. Which means I have to keep busy making sure that vegetation is growing only where it belongs.

We have a large maple tree in the front and back yard, and our neighbor to the left of us has one in his front yard, too. That means there's a lot of helicopter seeds flying through the air in the late spring. After they land the 'wings' quickly disintegrate, leaving no evidence of where they landed. Until a tree sprouts up. See the four arrows and circles in the photo? Those are wannabe trees that weren't there yesterday. They're all gone now, pulled up and tossed in the compost pile.

Years ago I bought a six pack of white alyssum at the garden center. They grew well in the west-facing bed by the front door, getting three inches tall and spreading out to almost a foot in diameter. Since that time they've self-seeded and come back prolifically each year.  If I didn't cull some of the sprouts the bed would be completely covered with the tiny white flowers.  For example, you would think this is one cute little plant, right?  It's actually three individual ones. Two of them got pulled up, leaving just one to spread out. 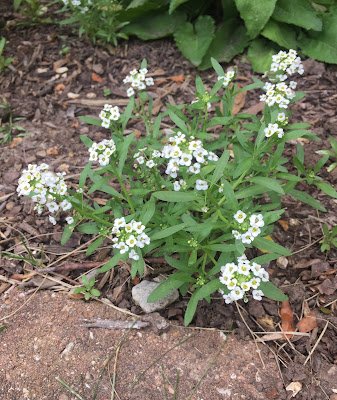 I don't remember planting purslane in this flower pot, but the surface of the soil is covered in hundreds of its tiny shoots. They're actually doing better than the impatiens and the coleus I put in there this year, so in this instance I may just let the seedlings take over. 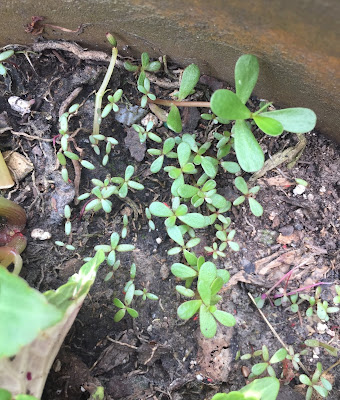