Our city's St. Louis Blues played their first National Hockey League season in 1967. They've made it to the Stanley Cup finals several times, but have never been able to win. This might be their year, though.
Now they're in the final round, playing against the Boston Bruins. The Blues lead the best-of-seven series three games to two. Ever since they won their game on Thursday the potential of bring home the Stanley Cup has been the talk of the town. People are wearing their team logo shirts, which in other years have already long been put away. The newspaper is full of ads with a team tie-in. Businesses all have Let's Go Blues signs. The song 'Gloria' by Laura Branigan is this year's team victory song, and when someone says "Play Gloria!" you know exactly what they're talking about.

Sunday is Hubby Tony's night to cook dinner, and he wanted a hockey tie-in before tonight's Game 6. Since there aren't a lot of blue foods he got creative, making some tasty Boston Baked beans (which we demolished!), and a spinach salad with blueberries and blue cheese. 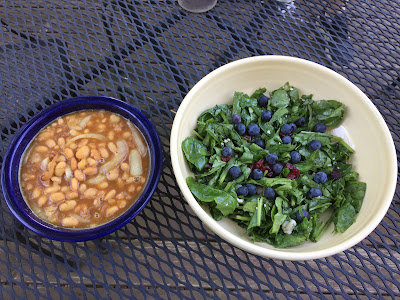 Dessert was a chocolate hockey puck cake drizzled with blueberry syrup (and sherbet, just because). 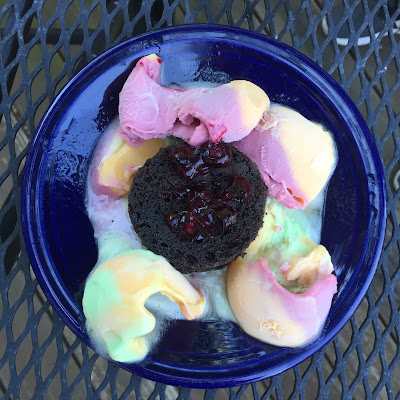 It would have been nice to finish the series up tonight, but the Bruins ended up winning 5-1. Now all the excitement will be transferred to Wednesday night, when I hope the Blues will come out on top.

Five years ago today: Tear It Up