The End Is Here

After the polls close today the United States 2018 Election Season is over. Thank goodness!

Our state had hotly-contested national, state, and local races, along with multiple state and local amendments and propositions. The radio and TV ads started more than six months ago. At first they were sporadic, but as Voting Day got closer they became almost nonstop. Three weeks ago large glossy political post cards started showing up in the mailbox. I threw the first few straight into the recycling drawer, but I was curious just how many we would receive and two weeks ago I started stacking them on the kitchen island.

After I voted today I came home and counted and recycled all of them--there were more than 30. Most were for specific candidates, but there was also a handful for local propositions and "dark money" scare tactic groups. The most unique was hand-written postcard from a volunteer asking us to vote for our incumbent Congressman. Over the weekend and yesterday we got some 'get out the vote' cards, including one that compared Hubby Tony's voting history with some of our neighbors. (Interestingly, I also vote in every election and did not receive anything.) 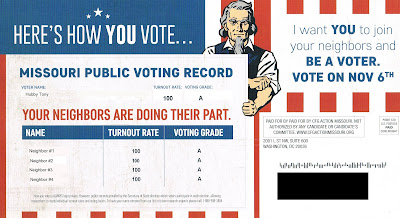 Tonight the local TV stations will suspend their regular programming to offer a steady stream of election analysis.  I'm not planning on watching much of it, but when I do it will be satisfying to know there won't be any political ads during the commercial breaks.