Shortly after we moved into our house 25 years ago I planted dwarf spruce trees on either side of the driveway. They grew well, and eventually got about five feet tall. 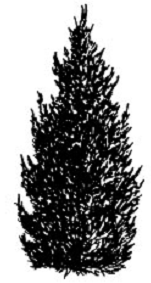 Last fall I noticed that the tree on the left had large patches of brown needles. A garden center diagnosed the problem as spider mites, and recommended a miticide. After a couple of applications some portions of the tree seemed to snap back, but the branches on the bottom completely lost their needles. This summer the tree continued to decline.  When I looked at it with a fresh eye last month I realized it was probably time to get rid of it.

I was going to get Son Donald to do the job when he was home from college during the break in between the summer and fall semester, but he was getting significant hours at his paying job to fatten his bank account. The tree was a manageable size, so I was pretty sure I could do it myself, but I wasn't excited to do strenuous work in the summer heat and the job kept getting put off. However, Hubby Tony recently mentioned how shabby it made the front of the house look and I realized it was time to put on my big girl panties and get to work. Tomorrow is trash day and yard waste pick up, so this morning after breakfast I put on some old clothes and my yard shoes and got ready to 'detree'.

The first step was to gather my equipment--garden gloves, a pruning saw, long handled shovel, hand trowel, compost fork, large plastic flowerpot, plastic tarp, and the green waste recycling bins.  I started by sawing off the branches from the bottom up.  The lowest were only a foot above the surface of the garden bed, so I had to stoop down to get to them, being careful not to kneel on the crunchy brown needles that flew off as I jostled the trunk.  Halfway up to the tree's top I found two tiny abandoned bird's nests nestled in the crooks where the branches met the trunk, signs that critters had enjoyed the shelter the tree provided.

When all the branches were removed the six inch diameter trunk stuck up like a mutant totem pole. I cut it off in three pieces, and tossed each to the side.  Finally, when there was nothing left but a stump I started digging around it with the shovel and compost fork, removing the dirt to the tarp by the flower pot full and exposing the roots underneath. I pulled up the roots when I could, but used the saw to cut through the bigger ones. Several roots extended beyond the tree's planting area; I left them in place, figuring they'd disintegrate over time.

Every so often I'd try to wedge the fork underneath the stump and lever it to see how much progress I was making. It was very satisfying to feel the stump start to wiggle, and finally topple over. One good tug later it was out of the ground!  It wasn't surprising that the small tree had a small root system, and I was able to add it to one of the yard waste bins.

There was too much dirt on the tarp for me to move it all at once, so I repeated the bucket filling process in reverse, dumping the dirt back where it came from. My original plan was to add compost to the area, but by this time I was too hot and tired (the entire job took me an hour and twenty minutes, and I considered it my workout for the day). After the ground settles I'll go back and do the enriching.

Now, with a tree on only one side the garage looks lopsided.  The second tree is in better shape, but it's still showing signs of age.  Tony and I will have to decide if we want to keep it or take it out too and start fresh.