This year's official 'garden' at my house consisted of one tomato plant and three pots of herbs, all purchased from a garden shop. Back in June the tomato got pruned by some type of critter, but after a short setback started growing again.  It never produced much fruit, though. (Or maybe the same critter had a taste for green tomatoes?)

When the weather turned steamy I started spending as little time outside as possible.  Even though the plant was in a bucket right next to the compost pile I barely glanced at it as I dumped the food scraps and scurried back inside.  At the beginning of August I noticed the plant had grown tall enough to lean on the pots hanging on a nearby shepherd's hook.  By that time, though, it was so entwined with the hanging plants I decided to leave it.

The beginning of September was so cool I thought about pulling out the plant.  After I harvested the first tomato of the season, thought, I decided to leave it in place. Then the weather got hot again, and the plant went into overdrive; it's now it's the monster of all tomato plants!  The stems that were leaning on the shepherd's hook are now poking though the deck rails onto the steps, and others are sprawled out on the ground, making it hard to walk in the area. 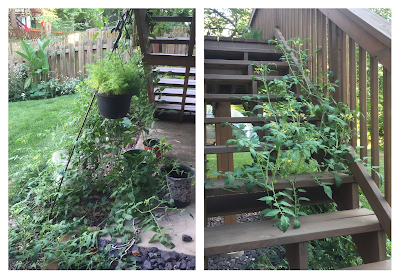 The plant is big, but I'm not complaining since I've been harvesting a ripe grape tomato or two every day for the past week.  I know that as soon as the weather cools off production will drop off to almost nothing.