No Seeds For Me

Hubby Tony did something really out of his comfort zone at work.  To celebrate I told him I'd take him out for a nice dinner. He chose a nearby steak and seafood restaurant, and this evening I met him there.

The restaurant's menu was extensive, but what really caught my eye was the early evening specials, which offered choices of select starters, entrees, side dishes, desserts, and drinks for a set price.  I chose a Caesar salad and Salmon Dijon with a baked potato. Tony ordered a house salad, filet Mignon, and potato.

It didn't take long for the waiter to bring our drinks.  A couple of minutes later the busser set bread and butter on the table, and our first course came out shortly after that.  Based on the traditional menu items I didn't expect any surprises with the salads, and I was correct.  Both were as expected-fresh greens lightly tossed with dressing and garnished appropriately.  The waiter offered freshly ground pepper before he left us to enjoy our food. 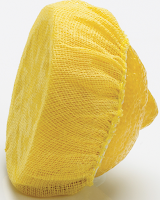 After the salad plates were taken away we sat and talked until the entrees came.  My large salmon filet (which covered half of the plate) was topped with a lightly toasted mixture of bread crumbs and Dijon mustard.  The other half of the plate held a perfectly-cooked baked potato.  Nestled in between the two items was half of a lemon.  At first I thought its rind had been cut decoratively, but when I looked closer I discovered the fruit end was covered by a small mesh net. The edges of the net were elasticized, making it look like a very small shower cap.

I was still puzzled about the reason for the net until I picked up the lemon to squeeze juice over my fish, and realized it kept the seeds from falling out onto my food .  What a great idea!

Both of us polished off all our food.  When the waiter came back for our dessert orders I asked for raspberry sorbet, and Tony ordered creme brulee. The sweets came and we ate all of them, too.  I can't speak for Tony, but when I left the restaurant I felt like I was waddling.