Can you see anything out of the ordinary with my purse? 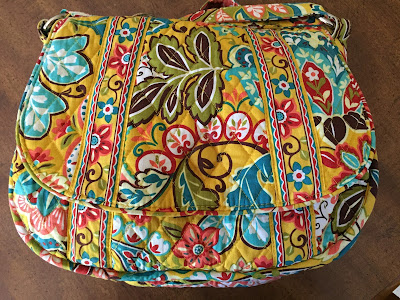 This is one of my small collection of Vera Bradley bags, a nice-sized saddlebag style with a flap that has a magnetic closure. The pattern is actually a replacement for my original purchase, which I used for several months before the magnet in the flap became detached and started floating around.  When that happened I called the company and they sent me a replacement.

Sadly, the replacement bag had the same problem. I was constantly fishing around the flap for the piece so I could drag it back to where it should be to keep the purse secured.  I liked the purse, but figured that if even if I got a second replacement it would do the same thing, so I decided to see if I could do anything to fix the problem.

Can you see the fix? 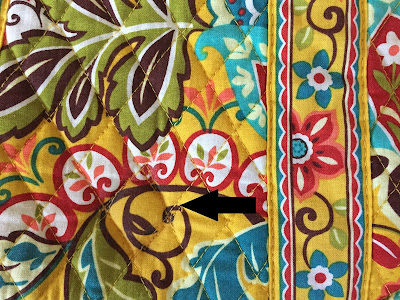 I just happened to have the right color thread in my stash, so I used a zipper foot and sewed around one of the quilted diamonds, effectively trapping the magnet in place.  The back side of the flap, which isn't quilted, now has the shape sewn into it, too.  I figure that very few people will see that part, though, and it's a small price to pay for being able to keep using the purse.