Earlier in the week Son Donald prepared a large amount of pumpkin puree.  He put most of it in the freezer, but per my request left one gallon-sized bag in the refrigerator.  The next day I used it to make a crock pot full of pumpkin butter. 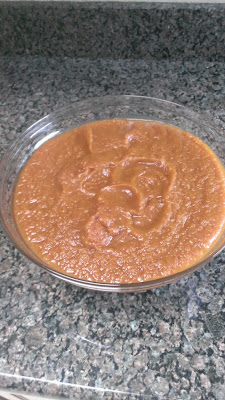 I stared out by looking at a variety of recipes for pumpkin butter on the Internet, and learned that it's simply a mixture of puree, sweetener, and spices cooked at a low temperature until it caramelizes and reduces in volume. Sounded easy enough.  My concoction was a mashup of four different recipes.  I was originally going to make a smaller amount, but when I added sugar to the puree it was way too sweet for my taste; I dumped the remainder of the bag of puree into the crock pot (which made it just right) then added cinnamon, allspice, and nutmeg.  I put the lid on the crock pot, turned it on low, and went to bed.

When I came downstairs the next morning the kitchen smelled wonderful!  The butter had reduced in volume by about a third and was a beautiful medium-brown color.  I immediately added a large scoop on top of my granola for breakfast.  Since then everyone in the house has had it on toast, and I even brought some to my boss.  I used some in a batch of muffins and used some to the pumpkin bars I made for a church event.