A couple of days ago I discovered a container of cottage cheese shoved in the back of the refrigerator behind a large bowl (which I must have purchased it two weeks earlier when I did a big grocery run.)  The container was still sealed, the contents looked fresh, and the 'use by' date wasn't until later in the month.  Still, since it had been there so long I decided it might not be the best idea to eat this cheese straight up.  Instead, it was the inspiration ingredient for a pan of lazy lasagna.

Traditional lasagna is good, but it's a pain to make. Messing with slippery lasagna noodles and making all those layers is too much work for a family dinner. I figured out a couple of years ago that if I used regular pasta I could mix and bake all the ingredients together. No one's ever complained.

Today I cooked a box of rotini, then added it to a mixing bowl along with sauteed onion and garlic, a pound of browned hamburger, a jar of spaghetti sauce, the cottage cheese, and part of a bag of mozzarella (the rest went on top). The dish usually includes frozen spinach, but there was none in the house. I did have a Costco-size bag of frozen kale, though, so I thawed some of that and stirred it in, too.  At the last minute I decided there might not be enough liquid, so Son Donald added a can of diced tomatoes and a can of mushrooms.

The mixture went in a greased baking dish and I sprinkled the rest of the cheese on top. It went into the oven covered with foil for 45 minutes, then uncovered another 15 until the cheese browned. A traditional lasagna sits for a while after baking to firm up; there was nothing in this dish to firm, but it rested on top of the stove while Donald finished cooking a zucchini/yellow squash mixture to serve with it. 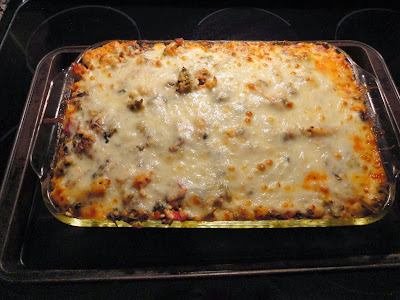 Donald, Hubby Tony and I each had a large piece.  I put the rest into the refrigerator.  It'll make great leftovers later in the week.