The Cats Weren't Too Wild About The Idea...

This morning the cats had their annual trip to the vet, their least favorite day of the year. 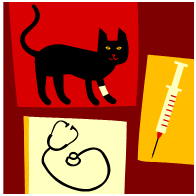 Last night I closed the door into the basement and most of the bedroom doors so the cats couldn't disappear for their morning naps.  As I left my bedroom this morning I closed that door, too.  The strangeness put the cats on edge, but they eventually stopped being suspicious and stretched out in a patch of sun in the family room.  The sun lulled them into complacency, and when it was time to leave an hour later it was easy to grab them and put them in their carriers.

The vet's office is four miles away.  The cats start crying the minute the car leaves the garage, and don't stop until we enter the office.  Fortunately there wasn't much traffic today and it was a quick trip.  We were ushered into an examination room, and the technician extracted the cats from their carriers one at a time to weigh them.

Jackson's weight tends to yo-yo.  Four years ago he was chunky, so we put him on a diet.  Over the next year he'd lost the equivalent of 27 pounds.  Last year he'd "found" some of those pounds, so we tightened up his diet again.  Pepper's always been thinner than his brother, but a few months ago we noticed he was looking a little chunky around the midsection, so he started getting a few less kibbles in his food bowl each day.  Our work paid off.  Both cats weighed less than they had last year.

When they were finished being weighed, the cats voluntarily sought the shelter of their carriers until the vet came in.   He examined Jackson first, and commented that he had quite a bit of tarter on his teeth.  I thought they'd been cleaned just a few years ago, but turns out it had been five years and needed to be done again.  The vet recommended leaving Jackson with him; he'd clean his teeth and give him his rabies shot while he was anesthetized.  I agreed.  The vet put Jackson back into his carrier and moved onto Pepper.  His teeth weren't as bad as his brothers, but still could use a good cleaning.  I ended up leaving both cats there.

It was strange driving away without howling noises from the back seat, and the house seemed curiously empty. I thought about them all day.

I got a call from the vet's office as I was leaving work--the cats were ready to go, and I picked them up on my way home.  They were very quiet in the car.  When I opened up their carriers in the house and watched them stagger out I understood why--they were still loopy from the anesthesia!

They rebounded nicely, though, and had a few kibbles to snack on.  They'll get their regular meal before bed, once we're sure they're fully recovered.  The vet called to check on them, and commented that "they'd had a very busy day".  I bet the cats would agree