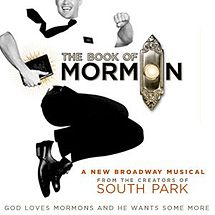 The Book of Mormon is a religious satire musical that in 2011 won nine Tony Awards (including Best Musical).  The play's touring company is in the middle of a stop in St. Louis at The Fabulous Fox Theater.  Today Hubby Tony and I, along with two of the Sons and the Daughter-In-Law, were there for the matinee performance.

DIL Nicole was the organizer for the adventure. She and Son Brian had tried to see the play in New York last year, but it was sold out. A couple of months ago when they were in town for the holidays she convinced us that going to the play here would be a nice family excursion. We checked our calendars, decided on a day, and purchased the tickets.

On my own I probably wouldn't have chosen this show, but when it opened here I started hearing a lot about it and got excited to see if it lived up to the hype.  After lunch we all piled into the car and drove to Grand Center, where the Fox is located, and followed the crowds into the theater.  We found our seats in the Upper Balcony, and didn't have to wait long before the house lights dimmed and the play started.

The Book of Mormon was written by Trey Parker and Matt Stone, creators of the animated television show South Park, and composer and lyricist Robert Lopez.  It's about two mismatched Mormon missionaries (Elder Price and Elder Cunningham) who are assigned to Uganda, where they encounter problems--a village besieged by poverty, disease and despair, disheartened fellow missionaries, and a genocidal warlord.  Despite all the problems, they persevere to a happy ending, accompanied by several big musical numbers.

The show had more than it's fair share of coarse language and raunchiness. (Not surprising, considering the writing team.)  I had trouble understanding some of the lyrics, but that was probably OK.  Quite a few times I found myself laughing at things I'd usually "tsk·tsk" at, but I really enjoyed it.  All too quickly the play was over and the cast was lining up for their curtain call.