Oh, What A Beautiful Day!

Yesterday, you may remember, was my birthday.  At the beginning of the week Hubby Tony told me he was taking Friday as a vacation day in my honor; I should come up with a plan for celebrating it.

I mulled over a lot of ideas, but since the forecast was calling for a bit of spring in the middle of winter (with a high of 65° instead of the normal 40°) I knew we needed to do something outside.  It was chilly and rainy on Thursday and I was concerned they fickle Mother Nature might outsmart the meteorologists, but when I woke up Friday Thursday's rain was gone, replaced by a beautiful partly-cloudy sky.

Tony and I walked to St. Louis Bread Company (AKA Panera) for breakfast, then came home to shower and get organized for the day's main event--eagle watching in Alton, Illinois, just over the state line.  In winter when the lakes and rivers freeze in the northern United States and Canada, eagles migrate to the area on the Mississippi River between the confluences of the Illinois and Missouri Rivers. They stay from late December through March, where they can catch fish in the unfrozen water.

This wasn't my first attempt at eagle watching.  Back in the mid '90s I took Sons Brian and Donald to the area for an eagle-watching weekend.  We went in late February;  it had been a warm winter and most of the birds had already left to return north.  We didn't see a thing.  I was hopeful that this time I'd have better luck.

The most direct way to get to Alton from St. Louis County is the Clark Bridge, a 4,620 feet cable-stay span over the Mississippi River. It's named for William Clark of Lewis and Clark fame.   When we got to Alton our first stop was at the visitor center, where we picked up information and learned the best places to see eagles.  We headed north on the Great River Road, stopping at a small park to enjoy the picnic lunch we'd brought.  Even with my jacket on it was a little chilly, but for January it was awesome!  I looked for eagles flying over the river in front of me or perched in the bluffs behind me.  No luck.

After lunch we continued our trip, stopping to look at the river in Grafton, where two nice ladies were walking their dogs and took our picture.  They told us they lived in a condo not too far from there and had been seeing a lot of eagles.  Unfortunately, the only thing Tony and I saw was a flock of seagulls in the parking lot. 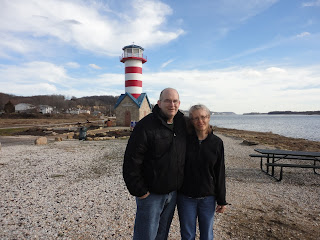 Our next stop was Pere Marquette State Park.  The original portion of the park's lodge was built during the Depression by the Civilian Conservation Corps, and features a row of windows overlooking the river, a huge fireplace, and a life-sized chess set.  We stopped at the front desk and found out the scenic driving route through the park was closed due to a downed tree.  No eagle-watching in this park! 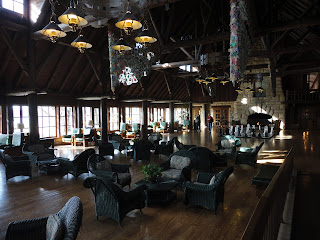 Originally we were going to backtrack and take the same route home, but for the sake of variety we changed our plan and took the free Brussels Ferry across the Illinois River to Calhoun County. Our tour book said, "Eagles are active near the Brussels Ferry, where they enjoy perching in the tall cottonwood trees lining the river banks." I didn't see any birds, so I don't think the birds got that message, but the ferry ride was fun. 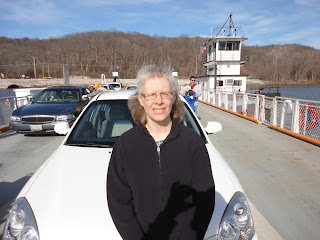 On the other side of the river we were going to stop at a wildlife refuge, but when we missed the turn we decided we were getting tired. We followed the signs toward the Golden Eagle Ferry, which crosses the Mississippi and ends up in St. Charles County.  Once again I got out of the car to look for eagles.  I turned around and saw this: 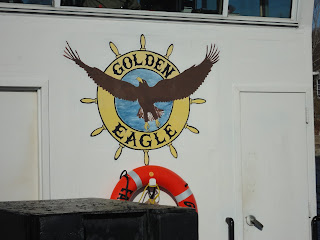 Not the eagle I was looking for, but I guess it would have to do.