Yesterday a group I belong to at church hosted our annual parish Chili Supper, an all-you-can-eat extravaganza of chili, chili mac, and hot dogs with or without chili. (We aim to please!)

The Chili committee cooked the food in the school cafeteria.  They handed out a recipe for cornbread and asked each member to bring a pan and a finger-food dessert of their choice.  During the event volunteers cut the cornbread and wrapped it for serving at the main line, and the people at the dessert table set out portions as needed.  A third station offered drinks.

On Saturday I baked my cornbread in a disposable aluminum pan. After it cooled I covered the pan with plastic, protected it with a large baking rack, and set it on top of the refrigerator. Yesterday after church I made carrot cake cupcakes with cream cheese frosting. Shortly before it was time to leave for my work shift I decided to move both cooking projects to the car so I wouldn't forget anything.

When I took the cornbread down, this is what I saw: 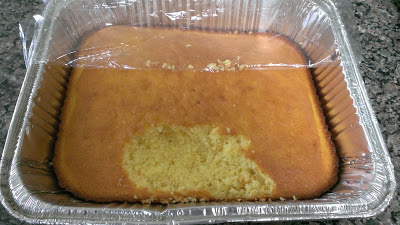 The picture doesn't do the damage justice; the hole was about an inch deep!  There were only two names on the list of suspects-Jackson and Pepper, the cats.  One of them got to the top of the refrigerator (probably from the counter) and then nudged the baking rack out of the way to have a cornbread feast.  Neither would confess to the wrongdoing.

I brought the pan with me but left it in the car, figuring if the kitchen started running low on cornbread we could cut away the ruined part and serve the rest.  Fortunately there was plenty; as a matter of fact there were a couple of pans that weren't even used.