Back in September I purchased a Groupon for a new-to-me butcher shop close to my house.  On Friday I finally got around to redeeming it.

It was easy to find the store on the south side of Manchester Road in Ellisville.  I learned that C&C Butcher had opened in July.  The small store had a nice selection of beef, pork, and chicken in display cases (both full service and self serve) and small displays of salads and side dishes, produce, sausage, and cheese. Another display case was devoted to Boar’s Head deli meats and cheeses, and a free standing shelf in the middle of the store held jerky, dried meat sticks, and condiments.

I felt like a kid in a candy shop. It was hard to figure out what to get, but when I saw the large tubs of marinated chicken breasts behind the counter inspiration hit.  I decided to get one of each type (House, Caribbean, Buffalo, and Teriyaki) and suggest that Hubby Tony and Son Donald cook them for dinner on Sunday.

They were agreeable to that plan.

When Donald arrived after lunch today he and his dad got busy planning.  Since the weather was nice they decided to barbecue the chicken and serve it with brown rice and sauteed kale.  The only thing I did was de-stem and chop the kale for Donald when he realized he was running short on time. 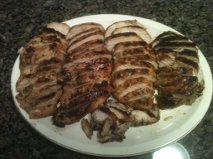 I've heard of tastings of wine, coffee, tea, cheese, olive oil, beer, and chocolate, but never chicken.  However, ours tasting turned out to be a hit.  The perfectly barbecued breasts were juicy; the marinade permeated every bite.  As much as I tried, I couldn't pick out a favorite flavor.  Fortunately, there were plenty of leftovers so I'll get to taste everything again.

In addition to chicken breasts, the store also had tubs of marinated steak tips.  I might just have to find out if those are as good as the poultry!