Tonight is our regular "Guys and Dolls" night with some old friends.  The men get together and play poker, and the women gather separately for dinner and socializing. This month was my turn to host.

Yesterday I woke up feeling a bit "off", and it got worse as the day went on. After lunch I cleared my schedule for the rest of the day and took a 2-hour nap. Pepper the cat thought that was wonderful; he curled up on my lap and slept with me. Tony brought dinner home and put it on the table. We ate, cleaned up, and went into the family room where I promptly fell asleep on the couch until Tony roused me at bedtime.  After washing my face and brushing my teeth I fell into bed and slept another 10 hours.

When I woke up this morning I felt better, but not great. I wondered if I should continue with my hostess role, but just in case I was contagious I decided to let someone else do it. I made a call and relinquished my duties, then laid in a patch of sun on the family room floor and dozed.

Tony was doing volunteer work today, so I had the house to myself. All morning I did five- or ten-minute tasks punctuated by some type of rest. Start the laundry, read the newspaper. Scoop the cat litter, sit on the couch and leaf through a magazine. Put the dishes in the dishwasher, look at emails. Amazingly, I got quite a bit done.  At lunchtime I made a frozen pizza, then since I wasn't going anywhere today I wondered what I'd have for dinner.

I decided that making a pot of beans (which don't take a lot of fussing over) would fit in with my lack of energy.  I'd done a lot of the prep work earlier in the month, when I made ham stock from a Christmas ham and froze it, along with a container of diced ham to add to the finished soup. On the next shopping trip, I bought a bag of Great Northern beans so I'd be ready when inspiration struck.  Today was the day!

I quick soaked the beans, boiling them and letting them set for an hour.  When the hour was up, I put the pot back on the stove.  I chopped an onion, a clove of garlic, and two carrots and added them to the pot.  After things came to a boil I reduced the heat and cooked the beans for 45 minutes. Close to the end of the cooking time, I seasoned the beans with salt and pepper, then added the diced ham and a large handful of dried parsley flakes. The resulting soup didn't look colorful enough, so I found some chives in the freezer and dumped them in too. 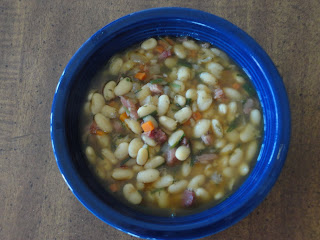 The soup was good, and even better with a little hot sauce splashed in.  Good thing we like beans, because there's enough soup for several meals!
Posted by Kathy G at 7:08:00 PM