What Are The Chances?

St. Louis is a good-sized city, but sometimes it feels like a small town. 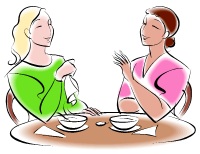 Tony and I went to an event tonight that drew a couple of hundred people from all over the metropolitan area.  The room was quite full when we got there, but we saw a friend sitting at a table across the room and took seats next to her.  Once we got situated I introduced myself to the other people sitting at the table.  The woman across from me said I looked familiar and we started trying to figure out a connection:
She mentioned the friend's names. It turns out it was Tony's brother and his family, who used to have an annual Fourth of July party that we'd both attended.  Who would have figured!
Posted by Kathy G at 10:51:00 PM