Back in the fall I made yogurt using a crock pot.  Although it turned out runny, it was quite tasty.  I made the recipe a couple more times.  Each batch turned out a little bit better, but after a month or so my yogurt making fell by the wayside.

The hardest part of the process was keeping the milk mixture warm so it could ferment properly.  The first time I wrapped the crock pot in beach towels, which worked well, but at that time the weather was still balmy.  When the temperature started to drop outside the kitchen got chilly. It was hard to keep the crock warm; the last time I made yogurt I had to drag out my largest cooler, line it with towels, and put in several jars of hot water along with the crock.  Too much work!

I thought about buying a yogurt maker, but none of the stores around here carried them. The project got put on the back burner until I found this in my local Goodwill over the weekend: 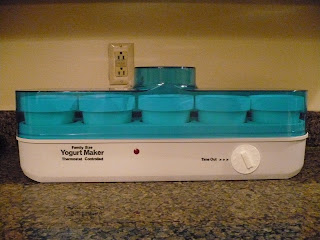 For the princely sum of nine dollars I'm now the proud owner of a Family Size Yogurt Maker!

The ratty-looking box contained a pristine thermostat-controlled heater base, plastic cover, six 12-ounce glass jars with sturdy-looking plastic lids, and a thermometer stirrer. The only thing missing was the user manual.  I thought it would be easy to find one on the Internet, but when I couldn't find one for my model I settled for a similar one from the same company, and hoped the directions were close enough.

I made my first batch of yogurt with the Yogurt Maker last night.  The process was quite easy. First I heated milk in a saucepan, checking it occasionally with the thermometer stirrer.  When it reached the correct temperature I stirred in dry milk powder and a cup of store-bought active culture yogurt.  I poured the mixture into the cups, snapped the lids on tight, put the cups into the base, and plugged in the machine. This morning I had five containers of yogurt waiting for me.

One of the five containers is already gone.  I had half of it for breakfast and the rest with my lunch.  I'm not exactly sure how I'll use the rest, but I suspect it won't be around too long!
Posted by Kathy G at 9:01:00 PM