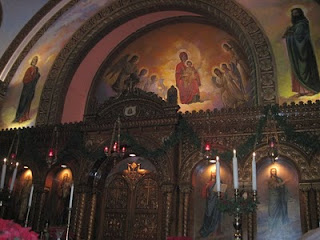 Photo by Jessica G
Yesterday I attended my first Greek Orthodox wedding ceremony when my nephew Paul married Jennifer, a beautiful woman who grew up in that faith.  I know there are quite a few commonalities between the Orthodox church and the Catholic church I attend, but yesterday's ceremony was unlike anything I've ever experienced!

The uniqueness was apparent from the moment we walked into the nave (the area where the congregation sits).  Since we were close relatives of the groom, we got a prime pew close to the front, and I got to look around while waiting for the ceremony to start.  Every inch of the room was decorated in some way. The sanctuary area looked like one I'd see in an older Catholic church: it was raised, had a draped table in the middle of it, and a lectern off to one side.  I assumed the table was the altar, so I was surprised when the center section of the back wall turned out to be a door that opened to reveal an ornate altar.  However, the table was where most of the wedding took place.

The wedding began in the normal matter.  The bridesmaids processed in, followed by a flower girl and ring bearer.  However, there was one additional person in the wedding party, a woman who was serving as the couple's sponsor and had a small part in the ceremony.  There were two priest celebrants (who were not part of the procession), and two cantors at a lectern off to the right.

The couple had made a special request to have their service in English; the default language for weddings in that church is Greek.  Thank goodness they did!  The ceremony itself began with the priest reading a series of petitions, with responses given by the cantors.  Then he blessed the rings--three times for the groom, then three times for the bride.  (That turned out to be a pattern; there were many instances where rituals were repeated three times.)  The priest gave the couple candles to hold, and read more petitions.  After the couple joined hands, the priest blessed crowns (white satin-covered circles decorated with white silk flowers connected in the back by a long white ribbon) and placed them on their heads.  Standing behind them, the sponsor exchanged the crowns three times.

Next came two Scripture passages. The first, from the Letter to the Ephesians, was read by the cantor. (This was actually read two times, once in English then again in Greek.) The second, the account of the Wedding at Cana, was read by the priest.  After a couple more prayers, the whole congregation recited the Lord's Prayer.

The priest blessed a cup of wine, then he offered the cup to the couple. After that, the priest, the couple, and their sponsor processed three times around the table. After the procession, the priest read a couple more prayers, then removed the crowns.  He introduced the couple as husband and wife.  The  ceremony was over, and it was time for the recessional.
Posted by Kathy G at 7:13:00 PM