When the boys were young, we used a Countdown to Christmas calendar. It had a pocket for each day that held a strip of paper with an activity that would help us get ready for Christmas. Even though I haven't used that calendar for many years, I still like the concept of spreading out the holiday activities, and try to do one or two things every day to make the season less hectic. 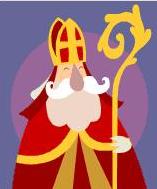 Do you know the story of Saint Nicholas (whose feast day is today)?  The fourth century bishop was known to give secret presents, particularly to those in need.  The idea of Santa Claus partially came from him.

We've celebrated St. Nicholas Day in our house for many years.  If you're a parent, you know how kids constantly revise their Christmas lists, usually changing their mind right after you've bought their "must have" item. One day an older and wiser mom told me how she handled that situation in their house. She had everyone put their shoes by the front door before they went to bed on December 5th, with their lists tucked inside. During the night St. Nick (aka Mom) would pick up the lists to give to Santa, and leave some trinket in the shoes to show he'd been there.  After St. Nick took the lists, they couldn't be changed!

I loved the idea, implemented it that year, and have followed it ever since. Even though I put off my shopping until after December 6th, there was always plenty of time to get it done, and I was spared the grief of not getting the "right" things.

Although the family is now grown and spread out around the country, the custom continues.  (If anything, it's even more helpful now since I don't have daily contact with everyone and it's harder for me to figure out what they need.)  Last week I sent out an email, indicating that Christmas lists needed to be compiled and sent by today.  Over the weekend I got a flurry of responses.  They even copied each other in, so I don't have to be the list clearinghouse!