I tend to get my hair cut on the short side, forget about it until it starts looking unkempt, then go and get a couple of inches cut off.  Hubby Tony likes to keep his short.  He decided a while back that rather than go to a barber he was ok with me buzzing it with an electric trimmer every couple of weeks. It's easy; I turn the clippers on and run them all over his head until everything is the same length. Over the years the boys have had different looks, from "little boy" cuts to skater cuts to long locks.

Son Donald came over for a visit last night.  His hair wasn't particularly long, but he decided it was time for a change.  His regular barber (AKA his roommate) wasn't available, so he asked me if I'd do it.  I was surprised he trusted me, but said I'd give it a try and we went to the "salon" in the basement bathroom.  Donald sat on the closed toilet, turning from side to side as directed.

When we started Donald's hair was longer on the top than on the sides, but at its longest point it was about four inches, too long for the clippers, so I started by cutting the excess hair off with scissors. It was fun to whack at his locks indiscriminately. When I was done he had strange tufts sticking out all over his head.  Then I put the guard on the clipper and went to work.  Donald has really thick hair, and a couple of cowlicks, so it took quite a few passes to get all the recalcitrant strands.

Afterwards there was hair everywhere.  I asked Donald clean it up and throw the trimmings in the compost pile. I'm used to Tony's pile of leftover hair being quite small, so I nearly lost it this morning when I went to toss the coffee grounds and saw something that looked like a hairy critter: 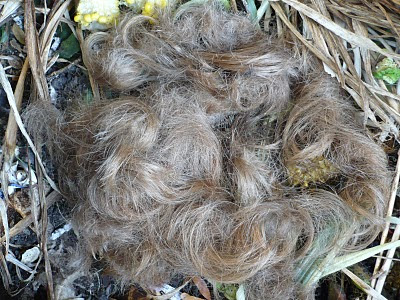 After I got over the initial shock, I realized it wasn't a critter. Just hair. I'll have to make sure the mass gets dispersed through the pile.  I'd hate to find this buried under layers of vegetable peeling and yard waste months from now.
Posted by Kathy G at 6:10:00 PM