Last school year I ate lunch at 11:15 or 11:30, but this year it's closer to 12:30.  I was having trouble finding breakfast foods that would stick with me that long, but I've finally got a set of go-to items that work.  One of them is yogurt with some type of whole-grain cereal and fruit. I'm going through a lot of the stuff!  Last time I was walking with my friend Dani, she said yogurt was easy to make, and she'd email me some information.  Sure enough, a couple of days later she sent me a link for making yogurt in a crock pot.

I was excited to try out the easy-sounding recipe.  The ingredients for plain yogurt were simple: a half gallon of milk and a half-cup of store-bought live culture plain yogurt (I used Whole Foods store brand, since I happened to be there for lunch on Friday). Although it's not technically an ingredient, the recipe also called for a thick bath towel to keep the crock pot warm during the resting process.  The recipe may be easy, but it's time consuming, with a lot of "sitting around" time.  I started it before dinner, then messed with it mid-evening and again before I went to bed.

The half gallon of milk fit nicely into my 3 1/2 quart crock pot.  (Like the stylish harvest gold and brown motif?  The cooker was a wedding present 30 years ago.  It still works, so I'm not inclined to replace it.) 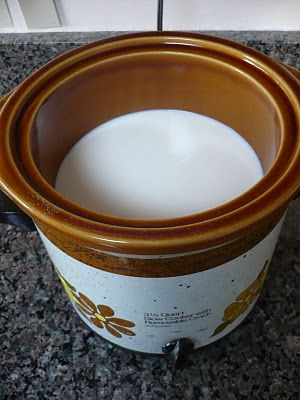 The first step is to pour the milk in the crock pot and heat it on Low for 2 1/2 hours, then unplug it, leave the cover on, and let it sit for 3 hours.  (Dani suggested I add a cup of powdered milk at this point, because she said it makes a firmer yogurt and adds nutrients.)

After the 3 hours passed, I scooped out 2 cups of the warm milk, put it in a bowl, and whisked in the prepared yogurt. I added the bowl's contents back into the crock pot and stirred it in. (This is where the recipe said I could add an optional packet of unflavored gelatin to the mix to help the yogurt thicken.)  Then I put the lid back on the crock pot, wrapped it in a heavy bath towel for insulation, and went to bed. 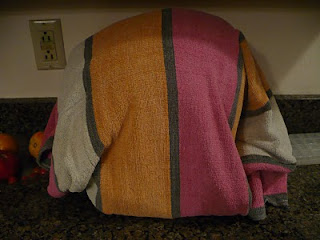 The recipe suggested it needed to sit for 8 hours. After a good night's sleep I came downstairs, carefully unwrapped the towels, and opened the lid.  A delightful "yogurt-y" smell emanated from the crock, so the milk definitely fermented.  Unfortunately, it was very thin, more like a yogurt sauce then what I'm used to buying at the store.  I spooned some on my breakfast granola (it tasted wonderful) then poured the rest into a coffee-filter-lined colander and let the extra liquid strain out to thicken it up. 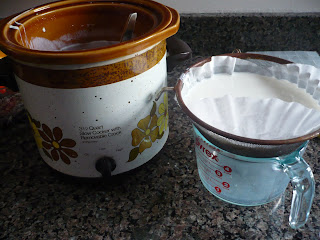 When it was thick, I spooned it into two containers and put it in the refrigerator. The recipe says that the yogurt will last 7-10 days, but I suspect it will be gone long before then. If I decide to make more, I'll save 1/2 cup as a starter for the new batch.
Posted by Kathy G at 9:40:00 PM