For many years I had to feed two adults plus three growing boys on a limited budget, so I'm used to buying the cheapest of everything.  Now that there's just two of us in the house, though, I can occasionally splurge a bit. I've been receiving blog and email reminders for the past few weeks that Whole Foods was having a sale on ground grass-fed beef today. It was $3.99/lb (which is $2 less than usual).  Grass-fed beef is supposed to be healthier and taste better than meat from cattle that have been fed grain.  I was excited to give it a try.

I go to Whole Foods most Fridays for lunch. Today, in addition to my other purchases, I stopped by the meat department and requested two packages (one pound each) of ground beef from the case. With gloved hands, the clerk scooped up a handful of meat and set it on the scale. He added small bits until it measured exactly one pound, and wrapped it in butcher paper.  After repeating the process, he handed both packages to me.

When I got home, I froze one package and decided to use the other one for stuffed peppers. This week the garden produced a bumper crop and I had seven small peppers-six green and one red-sitting on the counter waiting to be used.  I started some brown rice, and opened the package of meat.  The raw beef was pinker than the stuff I usually get, and looked fresh.  I crumbled it into a container, added a lid, and put it in the microwave.

Grass fed beef is supposed to be leaner, but the package label indicated this was 85% lean, which is what I'm used to buying. After the meat was microwaved, I strained the juices into a measuring cup. There was a substantial layer of fat that rose to the top.  When it got hard, I took it off and threw it away.  The remaining clear juice had a pure beef taste.

When the rice was done I mixed in the meat and the juice.  I sauteed onions and garlic and added them, along with two small finely-chopped tomatoes, a squeeze of BBQ sauce, and a can of tomato sauce. After parcooking the peppers, I stuffed them and spooned more tomato sauce on top: 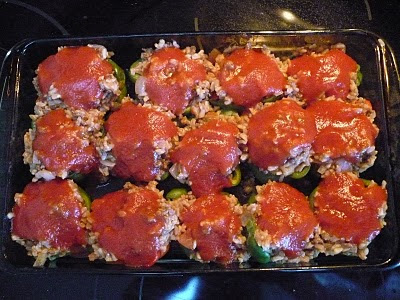 When Tony called to say he was coming home I put the pan in the oven to heat and cooked some frozen corn.  Dinner was served.

These were the best stuffed peppers I have ever had!  Even though I ate until I was stuffed, there are enough left over for lunch tomorrow.  I can't wait.
Posted by Kathy G at 8:40:00 PM