I cannot endure to waste anything as precious as autumn sunshine by staying in the house. So I spend almost all the daylight hours in the open air
--Nathaniel Hawthorne--
I love fall!  The mornings and evenings are chilly (don't forget the jacket!), but the middle of the day is warm enough to shed that jacket and run around in a t-shirt.  However, the nice weather will be coming to an end soon, so I made the most of today.

Thursday is the last day of my work week. When I left the preschool parking lot at 12:30 the sun was shining and the sky was completely blue, which put me in a great mood.  I had a few errands to run on my way home.  Instead of being a chore, today it was fun. At one strip mall, I was able to cross two things off my list, walking across the parking lot from one store to another. It didn't even annoy me to get behind a slow-moving pickup truck.

I got home and fed the cats, then decided to finish disassembling the garden for the year.  I'd removed the tomato plants a few weeks ago, and never got around to planting fall crops, so all that was left was a few sad-looking green pepper plants.  I carefully removed the remaining fruit from the stems, then gave each plant a pull.  They came out roots and all and I tossed them in the yard waste trash can.  I pulled up the stakes attached to the chicken-wire fence, and rolled it up, then did the same thing with the string trellis that held up the snow peas in the spring.

After I finished in the garden, I took the newspaper out to the front porch, which faces west. The angle of the sun was such that it reflected off the front wall of the house, so I was getting warmth on my front and my back.  It felt wonderful.  I sat and read the paper from cover to cover.  By that time, things were already cooling off a bit and it was time to come back inside. 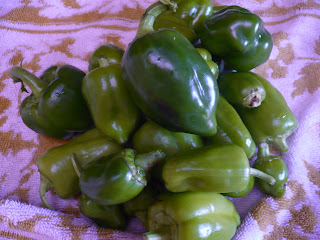 To use up the peppers, I decided to make Inside Out Stuffed Green Peppers, which is pepper stuffing that has the chunks of  peppers mixed in and cooked in a casserole dish.  I started some rice, cooked a pound of ground turkey, then seeded and cut up the peppers.

I went to the deck and snipped some chives from the pot I keep out there.  (That pot will go under the deck, buried in a bigger pot of leaves, right before the first freeze of the season, so I don't know how much longer I'll be able to enjoy them this year.)  The chives went in a mixing bowl, along with the rice, turkey, peppers, frozen corn (for color) and a jar of spaghetti sauce.  Just like that, dinner was put together.

Tony was working late tonight, and I planned to eat with him, but as soon as dinner was made I realized I was hungry.  I scooped some of the casserole in a bowl, heated it in the microwave,  poured myself a glass of milk, and took my first bite.  I savored the last hint of warm weather in my meal, just as I had enjoyed it the rest of the day.
Posted by Kathy G at 7:41:00 PM