What A Tangled Web We Weave

When I went out to the back yard this morning after breakfast, I saw dozens of webs like this one: 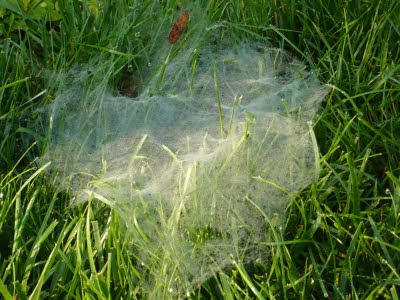 Some of the webs were large, and some were small, but they were all covered with dew and glistened in the sun. Each one of them had an open hole in the middle. I assumed they were made by a spider, but wanted to know what type. After a little research, I learned that I was seeing the handiwork of funnel web spiders, sometimes called grass spiders.

Funnel web spiders can make a sheet web as large as three feet wide. The web, with its funnel (the hole in he middle), is more often noticed than the spider itself. The funnel portion of the web leads to shelter in a rock crevice or dense vegetation. Funnel web spiders typically build webs several inches above the ground in short grasses and in window wells. The spider hides in the concealed area of the funnel and then dashes out onto the sheet portion of the web to capture an insect caught in or walking across the silk platform.

The female spiders are responsible for the webs I saw. Male grass spiders spend most of their life wandering in search of a mate. Females don't move from their web unless they need to find a new location to build a new one. They spend most of their time capturing and eating prey, building up their strength to mate and lay eggs. In the fall, after mating, the females will deposit a disc-shaped egg sac in a crevice. Both males and females are dead by the first frost.

I was glad to find out that unlike some funnel web spiders, our indigenous ones are harmless. Unless you're a bug!
Posted by Kathy G at 8:39:00 PM