After I finished my errands this afternoon I decided it was too pretty to go home. The gloomy weather that's hung around the past couple of days moved off this morning; the sky was blue with just a wisp of cloud and the temperature was in the upper 70s.

I decided to explore one my city's municipal parks. When the boys were in Boy Scouts, the Troop used to have their summer meetings there. The park's not very big; the boisterous Scouts tended to overrun it. Today the small parking lot was empty. I locked up the car and started walking. The paved park trail looped around a pavilion that held eight picnic tables. A small building held the bathrooms, and a tiny playground was next to it. It only took a couple of minutes until the pavement started curving back towards the parking lot. However, a second gravel trail veered off to the east. I decided to follow it.

I traveled for a minute on the new trail before I saw a large open area to my right. It beckoned me to see what was on the other side of it, so I followed my instincts. Soon, I saw a large parking lot in front of me, and I knew exactly where I was. The lot (which was on the other side of a residential street) belonged to the Methodist church where my boys went to preschool. Also on the street is the parish cemetery for my Catholic church. When I got to the street, I turned right, traveled a couple of hundred feet, and walked between the substantial wrought-iron cemetery gates.

Manchester, the city where I live, hasn't always been the land of traffic jams and strip malls. It has a history dating back to the early 1800s. At one time, Manchester was a one-day stagecoach ride from St. Louis along the Overland Trail. The original settlers were predominantly Irish, but in 1865 there was a large influx of Germans into the area. The first church began in the 1850s (as a mission with no permanent priest). As more people moved into the area, a resident pastor was appointed, and a larger church was built. The cemetery was dedicated in 1851. 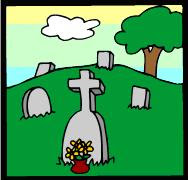 The cemetery is not large; you can see the entire thing from the entrance. I was the only person there today. It's up on a hill behind a bank that faces Manchester Road, but it feels like it's far away from the everyday hustle and bustle. You can barely hear the traffic.

Even though I've lived in the area for more than two decades, I was at the cemetery for the first time a couple of weeks ago when a friend's father died. The day of the funeral there was a large canopy covering his grave area. Today the canopy was gone; the hole had been refilled and the grass placed back on top. The remains of a lovely flower arrangement, which had been vibrant the last time I saw it, was laying on top of the grave. All of the flowers had turned brown, although the roses still maintained their shape.

The older gravestones were clustered in the back of the property. The weathered markers were barely readable, although I could make out that they were written in German. Looking at the names, birth dates, and death dates, I was able to contemplate who those people were and what their lives were like. Several of the newer graves were decorated with flowers, and one had a pair of small ceramic bunnies set on top!

My exploration finished, I retraced my steps and went back to the car.
Posted by Kathy G at 8:51:00 PM