I read in the newspaper today that the state of Oklahoma now has a State Rock Song--"Do You Realize" by the Flaming Lips. It's one of three states that have made the designation for official rock song; Washington's is "Louie Louie", and Ohio's is "Hang on Sloopy". 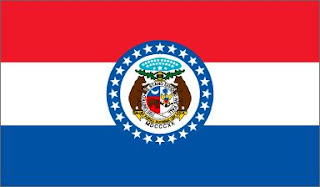 Missouri only has one state song, the Missouri Waltz. I know that our nickname is the Show-Me State, and the Eastern Bluebird is the state bird. I though the state flower was the flowering dogwood. I had incorrect information though. Turns out our tree is the dogwood; the white hawthorn blossom is our official flower. Today I researched all the state insignias for the state of Missouri.

I got my information from two Wikipedia articles. The List of Missouri State Symbols had most of the insignias, but I found a couple additional ones in Lists of United States State Insignia, which listed the insignias of every state.

Our official:
I was disappointed that Missouri hasn't designated a state beverage, tartan, toy, or sport like some other states have. On the other hand, maybe that means our elected officials have better things to do than make more insignia designations!
Posted by Kathy G at 7:25:00 PM