This Cat Has Been Around

In the summer of 2002 Hubby Tony and I chose two kittens from a litter at our sister-in-law's house. We waited until they were weaned, then brought them home and named the kittens Pepper and Jackson. Counting backward from their weaning date we arbitrarily assigned them a birthday of May 15th. The two brothers had a great life together until Pepper crossed the Rainbow Bridge in November of 2019.

Today Jackson turned 20 years old. In honor of the day we catered to his needs and gave him extra attention whenever he looked like he wanted it. Tonight Son Donald came over for dinner. After we ate I got Jackson's birthday treat ready. On a piece of paper I wrote the number 20, taped it to the kitchen floor, and arranged 20 cat treats on the lines. 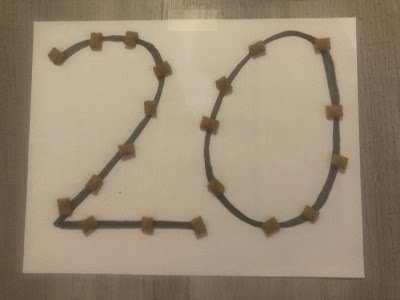 Jackson was MIA, and Tony went to find him. Turns out that Jackson was in the back of the condo enjoying his early evening nap, and a little annoyed at being woken up. He was even more irritated when Tony carried him into the kitchen. Jackson doesn't see as well as he used to, so when Tony set him on the floor he walked past the paper a couple of times. Eventually he realized it was there and made quick work of the treats. 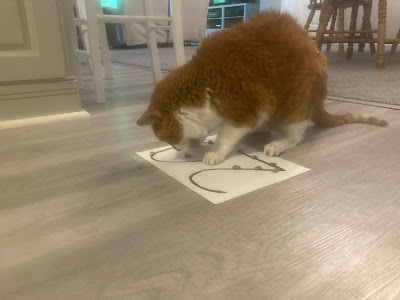 After all the crumbs were sniffed out and consumed Jackson left. I watched him walk down the hall, and suspected he was headed back to the bedroom for more napping. But it was his day to do anything he wanted.

Five years ago: The Wide Spectrum of Mothering