Over the summer, long before I had any idea what Christmas presents I would be buying or receiving, I knew what the holiday would look like for the family. As the boys have moved around the country and expanded their families it's getting harder and harder to get together. This year Son Brian and DIL Nicole stated they would not attempt to travel this year with a three-year old and five month old twins, and Son Tony and DIL Ie would be visiting her family in California. We figured out that a West Coast Christmas would be the most logical option and booked our tickets in August. 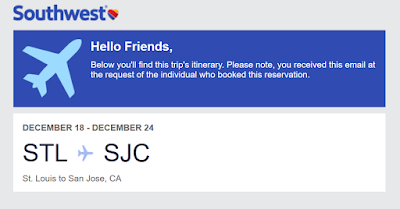 Hubby Tony and I flew into San Jose and stayed for six days. Other members of the family were there for parts of that period, and the entire family overlapped for about 36 hours. Brian and Nicole rented a nearby house through Airbnb. The house was close enough to walk to, but Brian also offered the use of one of their cars to get back and forth.

I have never not been in my own house for Christmas, but the opportunity to see Twins Ell and Dee was enough to get me excited:

And then there was Big Brother Jay (hanging out here with a dog they were sitting for a friend): 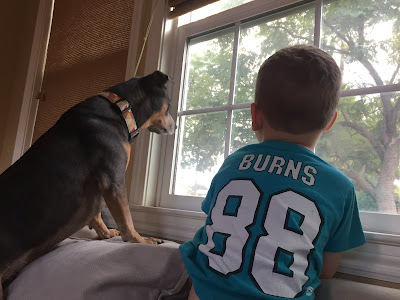 On Sunday morning we exchanged our gifts. After lunch Son Tony and Ie gave us the best gift of all when they announced they were expecting a baby in late June!

The days flew by all too quickly, and it was time to get back on an airplane to come home. I was surprised that there were a substantial number of travelers on Christmas Eve, but we made it through both airports without any issues. As wonderful as our time in California was, it was good to be home.
Posted by Kathy G at 8:15:00 PM