Last night Hubby Tony and I celebrated our wedding anniversary by going out for an eventful dinner. A couple of weeks ago he did some initial research and sent me a possible list of restaurants, then I let him know the ones that I liked the best. Based on my choices and where he could get a reservation we had an outstanding meal at Savage.

The restaurant has shown up on multiple 'Best Of' lists, and based on what I read I was excited to try it. One of its most unique feature is that there is really no menu. You just select the number of courses you want (four, six or twelve) and the chef does the rest.

The restaurant is located inside what used to be an old liquor store, and there's no outside signage on the building to indicate its new purpose. When we got close to the door one of the wait staff opened the door for us and welcomed us into a large room with a tall bar with high-top stools arranged neatly around three sides of an open kitchen.

There were already a half dozen people sitting at the far end of the bar, and the hostess pulled out the next two stools for us. All of us were considered a seating, and received our food at the same time. A server came and asked us how many courses we wanted (Tony and I had agreed on the full twelve), if we had any allergy issues, and what we wanted to drink.

All of the cooking and serving was done from inside the bar area. It was fascinating to watch the chef and two assistants work very hard on each dish throughout the meal. We had nine savory and three sweet courses. Each was only a couple of artistically composed bites placed placed on unique plates and bowls, and each course came with the correct new silverware.

Here is a collage of our courses: 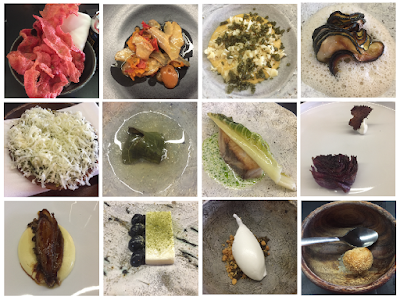 Each time a server placed a dish in front of us they explained what we were going to eat. Some of the ingredients were new to me, and some familiar ingredients were prepared in ways I would never imagine. (For example, the red dish in the top left photo is chicharron, which is usually made from fried pig skin. These were made from pureed beets. There's a slow cooked zucchini with barley foam on the top right, a melt-in-your-mouth barbecued cabbage with goat cheese underneath that, and a tiny slice of semi-frozen buttermilk with blueberries and fig leaf sugar in the bottom row.)  Several times I was tempted to pick up a plate to lick the last of a sauce up, but you'll be happy to know that I managed to control myself.

Our dinner lasted just under two hours. I would have told you that I would be stuffed after a twelve course meal, and I would have been wrong. Instead, I was pleasantly full. As we left one of the wait staff held the door open for us and invited us to come back again.
Posted by Kathy G at 8:40:00 PM