Since the beginning of the year I've been one of about 30 women planning a religious retreat at a local retreat center. Tomorrow morning after breakfast I will, in the event lingo, "head up the mountain" and not come back until Sunday morning.

One of my responsibilities for the retreat is to have flowers for one of the events. I needed 60 stems. And there wasn't really a budget for flowers. As I was trying to figure out the cheapest way to get the job done, one of the other women on the team suggested that I check with nearby funeral homes to see if they had any arrangements to give away. 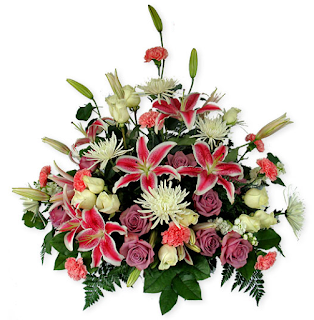 That was a source I hadn't thought of!

I called the nearest one last week and asked about donations. The woman I spoke with said I would need to contact them a day or two before I needed the flowers. When I called back yesterday there were three arrangements available. They put my name on them, and said I could pick them up any time during the day.

I stopped by the parlor today when there were no visitations going on. The large building was eerily quiet. I announced myself to the attendant at the desk. He walked with me to an empty viewing room, pointed out the arrangements that were mine, then helped me carry them out to my car.

When I got home I disassembled the arrangements. Many of the flowers were past their prime and went straight into the yard waste trash can, but in the end I had about half of the flowers I needed. I also kept some greenery and filler flowers that may come in handy. After a trip to the store to buy the rest of the flowers I needed, I placed everything in some plastic cat litter buckets, then staged the buckets by the garage door until tomorrow morning.

Now my garage temporarily looks like a florist. I didn't think about how much room all those flowers were going to take up!
Posted by Kathy G at 8:24:00 PM