On their way out of town last week, Son Brian and DIL Nicole gave me an early birthday present. The large wrapped box they presented me held an Instant Pot. Brian said he'd bought one for himself and really enjoyed using it. They were guessing I would like it too. The funny thing was that I almost put the item on my Christmas list, but it was a little more expensive than we'd agreed to spend on each other.Great minds must think alike. 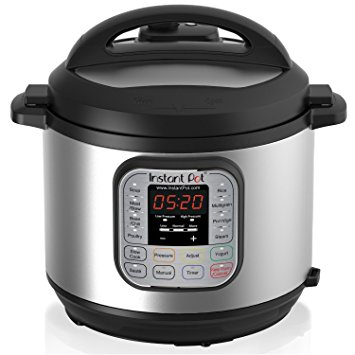 (What is an Instant Pot, you ask? It's the latest "it" small kitchen appliance, which combines the functions of a pressure cooker, sauté pan, slow cooker, rice cooker, yogurt maker, steamer, and food warmer.)

In the flurry of goodbyes the box got put on the dining room table, where it sat for a few days. Every time I walked past I'd take a look inside, but frankly I was a little intimidated. On New Year's Day I pulled out the instructions and read them, but that's as far as I went.

A couple of days ago I needed to make some brown rice, which seemed like an easy way to ease into the Instant Pot world. The element on my rice cooker must be going bad, because it's been taking more than an hour to cook a batch. The Instant Pot recipe for "Perfect Brown Rice" took closer to a standard 45 minutes, although my learning curve made the time closer to 50 minutes. The grains cooked more evenly than in the rice cooker, and the finished product was fluffy and properly al dente.

I transferred the rice to a bowl and put it into the refrigerator. Son Donald must have found it to his liking, too, because when I pulled out the bowl for dinner tonight there were only two small servings left. After the dishes were cleaned up I made another batch. This time there was less of a learning curve.

My next foray into Instant Pot cooking is going to be pinto beans, but after that there are over two million search results on Google for "Instant Pot recipes". I think I'm going to have fun trying some of them.