Time For Some Updates

When it was time to get ready for church this morning I went up to my closet to pick out something to wear. It was a nice day so Hubby Tony and I were planning on walking, so in addition to putting on somewhat fashionable clothes I had to make sure that my shoes were comfortable and easy to walk in.

My first choice was a pair of navy blue dress pants that I hadn't worn yet this season. When I put them on I decided that I didn't like the way they looked on me. I folded the pants neatly and put them in the donation box.

Next, I decided to use my old reliable good black pants and pair them with a black and white shirt. The pants were perfect the last time I had them on. However, today the slide jammed two inches from the top. I removed the pants and looked at the zipper, noticing that there was a half inch section of the zipper teeth pulling away from the tape. After taking a good look at the pant's construction I concluded that removing and replacing the zipper was more work than I was willing to do, so I folded up the second pair of pants and put them in the donation box.

I didn't have any other pants that would work with the shirt, so I started the picking out process again. This time I decided on a pair of light tan slacks, which I decided would look nice with a cream colored dressy tee shirt. After I was dressed I put on my old reliable brown leather slip-ons and realized that the right one felt funny (which wasn't the case when I wore them earlier in the week). I removed the shoes and examined the bottom. The molded rubber sole was falling apart.  It had a large hole in the side, which extended all the way to the center. I took off the shoes and put them next to the donation box.

I don't have a large selection of dress clothes, and I was running out both options and time. Rooting around in the closet again, I found a pair of grey pull on pants that I had decided were a tad too short the last time I wore them. However, today they would have to do. I slipped them on, decided the same cream tee made an acceptable outfit, and added my comfortable black mary janes.

As I walked out of the bedroom I made a mental note to add clothes and shoe shopping to my To Do list. 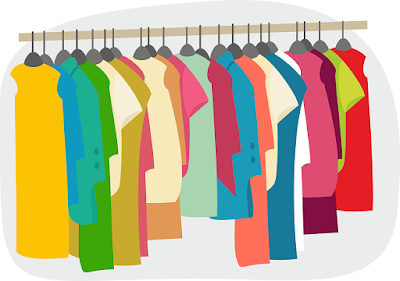