The first frost of the season is forecast for later in the week.  Yesterday morning the weather was still decent, so I took the opportunity to do some yard work, including pulling up the huge tomato plant next to the deck. In the last month it had grown even larger, and the end result was a Medusa-like tangle of stems and leaves. Hidden among that tangle were multiple clusters of large cherry tomatoes. 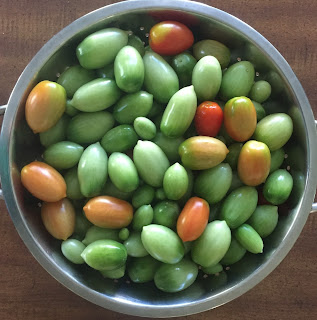 To deal with the snarl of stems I used a kitchen scissors to cut them into pieces about three feet long, then removed the immature fruits (and a couple of ripe ones) from each piece.  In the end I filled up a colander with green, semi-red, and a few red grape tomatoes.

I repeated the process with a second (standard size fruit) plant that had made itself comfortable along the back side of the garage. That area doesn't get much sun, but it didn't seem to bother the plant; it yielded another colander full of green fruit.

The tomato vines went in the yard waste trash bins.  The edibles were brought inside, where they got washed, dried, and dumped into bowls.  I covered the bowls loosely with plastic bags and set them on top of the refrigerator, hoping the cats wouldn't be motivated enough to seek them out there.

Now I have to figure out what to do with approximately ten pounds of green tomatoes.  Based on past experience, some of them will eventually turn red, and some of them are so immature they'd rot before they'd ripen.  Those go in the broth bag.  The rest will get used up somehow.

I'm trying to cut back on fat, so frying them isn't really an option.  Google gave me some good ideas that I'll incorporate over the next few weeks.  I started the project today by making Green Tomato Curry with Potatoes and Garlic Recipe.  It turned out really good.  By doubling the recipe I was able to use up an entire pound of fruit.