Dining Room For A Crowd

Last night Hubby Tony and I hosted a dinner for the members (and spouses) of a group he's involved in.  Including us, there were 17 people. We provided the drinks and main dish, and everyone else brought a side dish or a dessert.

A couple of weeks before the event Tony and I started talking about where everyone would sit.  With both leaves pulled out our dining room table comfortably seats 10, but we can squeeze 12 around it if we have to. For extended family dinners we move the long table so it's on a diagonal in the room and set up a card table in the corner. However, for this event not even that would be enough seats.

Using some creative thinking, Tony and I figured out that by moving the credenza around to an adjacent wall we could add an extra folding table at the far end of the room to make a T-shaped seating area. We borrowed a table and chairs from one of the people who would be attending the dinner.

I didn't want to spend a lot of money on decorating the tables, so I went with an eclectic look.  Both tablecloths were white, but two different patterns. I hit up multiple thrift stores to find napkins, deciding on a color scheme of blues, golds, and creams. At one of the stores I found a dark blue shower curtain which I turned into table runners. On top of the runners I set a mismatched collection of votive candle holders interspaced with small gold ball ornaments.

The result (minus the napkins, which I rolled around the silverware and set on the buffet table): 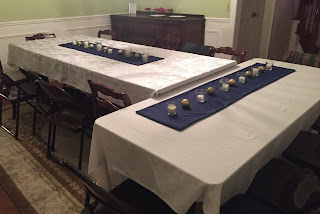