Yesterday was a busy day at the mall. In addition to listening to an awesome tuba concert, Hubby Tony and I got a nice Virtual Reality demonstration.

As we walked by a large, clear-sided display in the mall's center court we were hailed by two people wearing Facebook shirts.  They asked us if we'd like to try out their new technology.  We agreed it might be fun.  After signing waivers, we were taken to separate stations in the display. My associate quickly told me about the headset and headphones I'd be wearing, pointed out the hand rails I could hold if needed, and suggested that I make sure to look in front of, above, and behind me.

I had to take off my glasses to wear the headset. There was a dial to adjust the screen, but it couldn't completely accommodate my bad eyesight; the pictures were all a little fuzzy. (I would think most people would be able to see things perfectly.) After I put the headset on, adjusted it to my face, and placed the headphones over my ears the associate asked what I saw in the screen. She seemed to be satisfied with the answer, because she told me to have fun.

And it WAS fun! For several minutes I was right behind a woman rowing a boat, next to a huge, friendly-looking dinosaur, in the room with an Asian family in traditional dress interacting over food, floating through a meteor shower in outer space, and in the middle of a basketball game. The graphics were so amazing that I was reaching out to touch things that weren't really there, which I'm sure was quite entertaining to the people walking by.

At the end of the demonstration I took off the equipment and took a short survey about my experience. On the way out of the display an associate handed me a large Facebook thumbs up magnet. 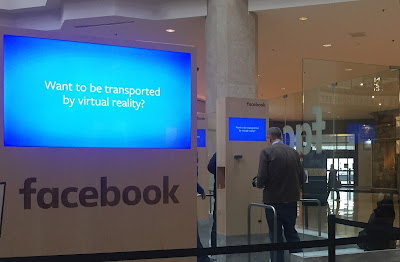