For Valentine's Day Hubby Tony gave me a large box of assorted dark chocolates.  The box had a full selection of flavors.  There were bite-sized creams, caramels, chocolate caramels, sea salt caramels, coconuts, fudges, molasses, and nuts enveloped in chocolate. 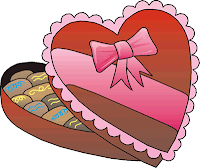 I had a piece, then offered the box around so everyone could sample. When it came back to me I had another piece.  Ten minutes later a third.  I couldn't leave it along!  Every time I passed by the kitchen table a piece jumped into my mouth, but at the end of the day the box still had a lot of pieces left in it.

I knew that with my lack of willpower for chocolate the pattern would continue all week.  Yesterday Son Donald had a friend over to work on a project.  As they settled down at the kitchen table with their books and paperwork, with Tony's permission I set the box of candy next to them and told them they'd be doing me a favor to eat some of it.

Nine hours later there was only a half dozen pieces left.  I'd call that a very good deed on their part.
Posted by Kathy G at 8:47:00 PM