Is It Soup Yet?

This morning I did my good deed for the day by donating blood at a local blood drive. When I came out of the building the air was filled with fat snowflakes. Nothing was sticking on the ground, but the day's forecast called for a couple of inches.  The general gloom made me want to go home and hibernate. All thoughts of doing the day's errands disappeared, and when I left the parking lot I turned left instead of right and headed home.

The snow was coming down pretty hard, and I felt like I was driving through a white tunnel. Once the car was safely in the garage I came inside and made myself a cup of hot tea.  Lunch was more than an hour away but the inclement weather made me want to piddle around in the kitchen. I decided to make some soup.

The basic cooking liquid came from the freezer-- the marinade/cooking juices from a Cuban pork roast.  After I thawed the juice in the microwave I poured it into a pan and added chopped onion and set the pot on the stove.  Ten minutes later I dumped in a bag of frozen vegetables and a container of garbanzo beans. While I waited for that to come to a boil I opened a can of diced tomatoes and a can of black beans and added both to the pot, then let everything simmer together.  About that time Son Donald came downstairs. I told him I'd provide lunch if he let me use his bag of turkey I'd seen in the refrigerator. He agreed. Twenty minutes later Hubby Tony was home and the soup was done.

Donald had made brown rice a couple of days ago. He pulled it out of the refrigerator, and we added some of that to our bowls. The 'on the fly' soup was so good I forgot to get a photo before it disappeared. 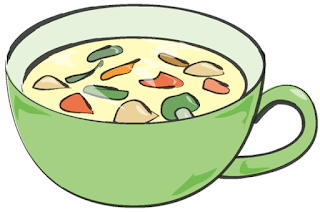