Tonight after dinner I cut the grass. At 81 degrees, the temperature was pretty nice for mid-July, but when I was finished I was still covered in sweat.  I came inside, turned up the ceiling fan in the family room as high as it would go, and sprawled on the floor underneath it until the sweat stopped. That's the point where I usually go upstairs and take a shower. Tonight, though, I thought it would be nice to treat myself to a soak in the bathtub.

It had been so long since I'd used the tub that I had to dust it out first. After it was clean I started running the water, then opened up the drawer where I keep my stash of bath products to see what I wanted to use. I chose a lavender-scented bath oil and poured a cupful into the water, where it soon sent up a heavenly smell. While the bath was filling I lit the set of candles I keep on a tray next to the tub.  When everything was ready I settled into the water and sank my shoulders underneath. Eventually I sat up enough to hold the book I'd brought with me. Time passed while I enjoyed the sounds of nature outside.

Eventually the water got too chilly for my tastes and it was time to get out. After I toweled myself dry I went to put my clothes on and discovered that my body felt unacceptably greasy.  Either my bath oil was past its prime or the summer humidity in the air was interacting with the oil on my skin. I ended up jumping in the shower, where I washed off most of the oil. 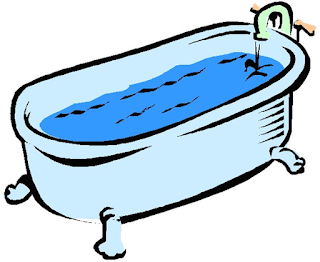