Can I Get In, Please?

Back in the beginning of 2014 I joined my church's Welcoming Committee and took charge of designing slides to advertise for parish events. Originally the slide shows ran on a TV placed in the church vestibule. Last September they installed two additional monitors in the Parish Center and asked me if I could start putting slides there, too.

Each Saturday afternoon I'd go and swap out the previous week's flash drives for new versions. It didn't take me long to figure out when the buildings would be open and I timed my visit accordingly. There was always something going on in the Parish Center--volleyball games in the fall, then basketball season kicked in after the holidays. However, one Saturday in late April when I arrived the Parish Center was locked up. The sports activity had switched to the baseball fields. 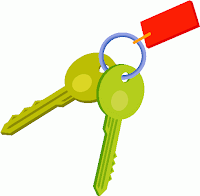 I adapted, and moved my task to Fridays during the school day. That worked, but I knew that when school was out for the summer the problem would return. One day I ran into the Director of Administration and asked him what I should do. He said I'd be able to get keys to both buildings so I could do the job at my convenience. I was surprised and honored that they'd trust me that much.  Later that week I stopped by the office and signed for keys that would get me into both buildings.

I was looking forward to seeing how well the keys worked, but the first week the janitors were working in the buildings and had them open. The next week, though, I was able to let myself into the locked doors, which made me feel very important.

Five years ago today:  How I Spent My Summer Vacation
Posted by Kathy G at 9:29:00 PM