Once a month an organization that Hubby Tony belongs to hosts a party for adults 18 and older with developmental disabilities.  Tony and I volunteer when we get a chance.  Tonight was one of them.

For a small admission charge party goers are treated to a DJ and snacks.  Sometimes there are attendance prizes or a special guest  (like Santa, who will make an appearance next month), but I think most of the attendees come just to hang out with their friends.  There are people there in their late teens, some in their late 50s, and many others in between.  Tonight it looked like there were between 180 and 200 people.

Tony and I worked at the soda table for the first shift. The 'bar' opened at 7:15. Fifteen minutes before that people started looking for drinks. By the time we set out the first cans there was a group milling around in front of the table.  During the shift we had to work hard to keep a good variety of soda out, but not so hard that I couldn't bop around to the music as I was working.

The DJ played a nice variety. There were new songs ("Best Day of My Life"), standards ("YMCA"), and slow songs (“Once In A Lifetime”). Half of the people danced, but the rest preferred to sit at a table with their friends, or grab a seat along the wall by the dance floor.  After I finished my shift I had to go to the bathroom, which was at the far end of the room.  I had to weave my way through the throngs of dancers.  They all looked like they were having a lot of fun. 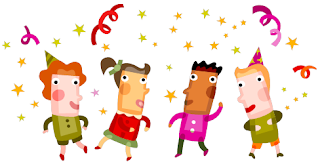 Five years ago today: I'll Have Mine With Milk And Sugar
Posted by Kathy G at 9:48:00 PM