A Tale Of Two Routes

If you live in Missouri and someone says they're going to "the Lake", more than likely they're talking about Lake Of The Ozarks. The central Missouri lake was built in the 1920s to provide hydroelectric power, but over the years it has also become a popular tourist destination.  This weekend I attended a  meeting at a convention hotel in the area.

I've been going to these meetings for the past three years. Every other time I had someone to carpool with, but even though I put out several feelers, this time no one wanted to leave at the same time I did.  At first I was disappointed that I'd be making the three hour journey by myself, but I decided to make the best of it.  On my way there Friday I detoured a few miles out of the way to meet a friend for lunch, and on the way back today I treated myself to an adventure.

There are two ways to get to the Lake.  You can head west on Interstate 70 and then southwest on a state highway, or go southwest on Interstate 44 and wind your way over and up on state roads.  For some reason I've always taken the first route.  This morning I decided to change things up and go the other way.

I didn't have to consult with anyone else to see if that suited them;  I just headed the opposite way out of the hotel parking lot.  Even though I was unfamiliar with the turns I had to make, everything was clearly marked and I made it to the Interstate without any problems.  Unlike 70, which is flat and lined with farm fields (mainly corn and soybeans), 44 has a lot of tree-lined rolling hills and many of the fields are planted in grapes.

It was a great day to be on the road.  The sun was out and only an occasional puffy cloud floated across the sky. Along the way I channel surfed radio stations, changing every time a commercial or a song I didn't like came on.  I stopped for breaks and food when I wanted to and there was no one to second guess my decision.  The exits came and went until I entered St. Louis County and knew I was almost home. 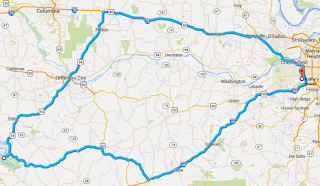