The mall where I work has planters of tropical greenery scattered throughout.  The plants are maintained by a professional company, and changed out when they start looking shabby.  When I started at the Customer Service desk last year there was a wicker basket on the corner of the desk that held an orchid plant.   The plant had six stalks, two of which had light purple blooms at the top.   The blooms lasted for a couple of months, but when they were gone and the plant was ready to be replaced the person who watered the plants asked me if I'd like it.

I've grown a lot of things, but never orchids. I've heard they had a reputation for being hard to grow, and unless something is easy I don't mess with it.  After some thought, though, I ended up bringing the plant home, figuring that if it died I wasn't out anything.

I brought the basket home and when I took the plant out I discovered a tag wedged in the bottom that told me I was now the proud owner of a Dendrobium orchid, which meant nothing to me.  The plant was in a 3 inch pot.  Instead of soil, the pot was filled with small black lava rocks!  My boss used to grow orchids, and told me that I should repot the plant.  However, I never got around to it. I put it on the east-facing window seat in the kitchen, watered it once a week, but otherwise ignored it.  I was thrilled when it sent up two new shoots right before the holidays, but nothing has come from them.

After I took home the Dendrobium, it was replaced with another orchid with bright purple flowers.  This one had a different growing pattern.  There was a single central stem with leaves on either side, and the blooms were on a spike that came from the base.  My boss told me it was a Phalaenopsis, which again meant nothing to me.  Its blooms faded right about the time the mall was being decorated for Christmas, and they gave us some poinsettias to put on the desk.  The boss set the orchid back in the storeroom for a week or so, then said he was going to toss it unless I wanted it.  Once again, I figured it wouldn't be too big of a deal to put the plant on the window seat (which by now was filled with all the plants I was overwintering inside).

It was cold the day I brought the Phalaenopsis home and the plant got chilled; for a while it didn't look like it was going to make it.  This plant was in a clear plastic pot filled with what looked like moss.  The roots were growing on top of the moss and many of them looked dead. After a few weeks, though, the leaves greened up and I saw some new healthy-looking roots.  Once again I ignored the plant except for watering it once every one or two weeks, when it got a good soak in the kitchen sink with all the other plants.

About a month ago I noticed what looked like a root growing up from the leaves.  However, it wasn't a root but a bloom spike.  It started listing to the side, so I staked it with a small piece of bamboo.  It continued to grow slowly, and eventually developed eight buds.  The buds closest to the plant got larger and larger until finally the bottom two opened: 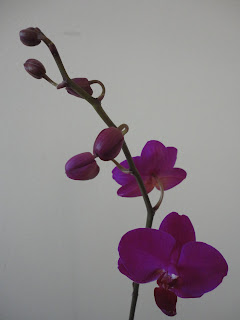 If the plant does this well with no attention, imagine what would happen if I learned how to take care of it properly!