On Monday we were scheduled to arrive in Cozumel, Mexico at 7:00 in the morning.  Our group (me, Hubby Tony, Son Brian, and DIL Nicole) had signed up for a shore excursion that would take us to the Mayan ruins at Tulum, followed by lunch and a "beach break" at another location.  Cozumel is on an island off the coast of the Yucatan Peninsula of Mexico. Once you're there you have to get to Playa del Carmen on the mainland by passenger ferry. That trip takes 45 minutes.  From there we'd take a bus, and repeat everything in reverse at the end of the day.

The tour left at 7, so we got up early and had breakfast in the Windjammer Café before going to the La Scala theater where the group was gathering.  I brought a bag with our swim suits, towels, and sunscreen, and stuck a bottle of water in my purse, along with some oranges from the cafeteria for a mid-morning snack.

When we arrived at the theater, we walked down to the front and stood in line to get a sticker that indicated which excursion we were on (There were several that started at the same place, then diverged once we got to the mainland), and took a seat.  Seven o'clock came and went.  One of the shore excursion staff, who was in radio contact with the deck, indicated we'd be leaving later than planned. The ship was having trouble docking at Cozumel due to rough water.

We ended up waiting an additional twenty minutes.  While we were waiting, the shore staff mentioned several times they had seasickness pills available for anyone who wanted them. I didn't need one of theirs because Tony had brought some of his own.  After taking a tablet he offered one to me.  I was pretty sure I wouldn't need it, but took it just to be on the safe side.

Finally the ship docked and we were cleared to leave.  Our group was one of the first off, going through the security area and onto the pier.  The weather was just warm enough for t-shirts, but it was cloudy, and a stiff breeze was blowing.  We walked to the ferry area, then waited at that pier for a few minutes.  We could see the smaller boat, which looked like it would hold a couple of hundred people. I could see the boat bouncing up and down at the dock, thanks to the rough seas.

Somehow the four of us ended up close to the front of the line to get on the boat, and we snagged window seats right by the exit. Once we got on we had to wait for 15 minutes while an a group from a different ship also boarded.  Before the boat left the ushers walked around passing out little green barf bags, then cast off the ropes and headed towards the mainland.

The first time the boat jumped over a sea swell it was like being on a roller coaster and quite a few people cheered.  The second, third, and fourth times each had fewer cheers.  Soon the constant up and down movement was nauseating.  About ten minutes into the trip I heard someone get sick. My stomach was rolling, and I tried to concentrate on the TV at the front of the boat.  Unfortunately, it didn't do any good.  In our group, Tony was the only one who didn't get sick.

After what seemed like an eternity we saw land. I couldn't wait to get off!   Fortunately we were right by the doors so it didn't take long.  At  Playa del Carmen there were multiple tour guides waiting.  Each guide held a sign indicating where they were going.  It didn't take long for our group to form and head towards a large tour bus.

The drive to Tulum took an hour. Shortly before we arrived, he handed out headphones and wireless transmitters on straps that we could put around our necks. During the tour he used a microphone, and his voice was transmitted to us. 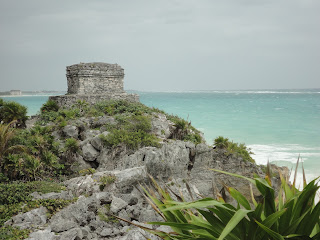 The parking area and visitor center were about a half mile away from the actual ruins. The guide offered us the opportunity to hop on a tram, but no one took him up on it.We walked past a gauntlet of shops that sold various crafts and souvenirs, then down the side of a road towards our destination.  Thanks to the wireless system, our guide was able to continue his commentary the entire time.

Tulum is set on a cliff top high over the Caribbean Sea. After the guided tour we had time to wander around.  The sun slipped in and out of the clouds, and the wind was really blowing, especially at the top of the cliff.

We returned to the bus, and the trip to the restaurant took about 20 minutes.  When we arrived, we found a buffet laid out in a large thatched roof porch that was part of a resort.  There was salad, pork chunks in a spicy sauce, some type of baked fish, black beans and rice, tortillas, chips, and salsa. Dessert was a wonderfully sticky-sweet rice pudding.

After lunch it was "beach break" time.  However, it was too chilly and windy to be fun.  I took my shoes off and ran into the ocean to say I did, but after the first wave covered my lower legs I ran out.  We sat in some beach chairs and watched the ocean before it was time to board the bus again.

The trip back to the ship was less eventful.  I took a second seasick pill, and even though we had another rocky ride, I didn't get sick.  We were late returning to the dock, but because we were on a ship's tour, we didn't have to worry about being left in port.
Posted by Kathy G at 8:07:00 PM