Remember when I told you Hubby Tony and I had been invited on a cruise by Son Brian and DIL Nicole?  After we paid for our reservation, we had about a month to organize everything before it was time to go.  On March 2nd we drove south on Interstate 55 to New Orleans, and on March 3rd we boarded our floating hotel for the next week, Royal Caribbean's Voyager of the Seas. Seven jam-packed days later we disembarked, full of memories.  We backtracked north on 55, and made it home by dinnertime on the 10th. 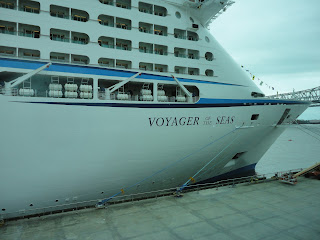 After a wonderful week, sadly I woke up on the last day of the cruise with a scratchy throat and stuffy nose.  My sinuses and ears were clogged up, and I was still feeling the movement of the boat even though I was on dry land.  That lasted for several days.  Monday night I started coughing, and spent the night on the couch because I couldn't sleep lying down. The symptoms have subsided, though, (for the most part--I still randomly feel like I'm at sea when I walk), helped along by some advice and supplements from the chiropractor.

Transitioning back to reality was hard.  Almost a week later, I still feel like I'm playing catch-up.  It didn't help that my boss asked me to work a couple of extra shifts this week.  However, the mound of laundry has been tamed, and the emails and blog reader conquered.  Soon I'll be able to share some of my adventures with you.
Posted by Kathy G at 5:01:00 PM