I have a couple of big projects coming due in the next two weeks, and not much time to do them.  Today was jam-packed with activities and errands, including grocery shopping.  After I did the "big shopping" at Aldi I stopped by the house to drop off the food, because it was too warm to drive around with perishables.

When I walked in the house at 1:30 the cats were waiting for me in the kitchen.  They thought it was time to eat!  However, I reminded them it was too early for their meal. (Yes, I talk to my pets.  Don't you?)  I brought in the bags and set them on the counter, then took all the refrigerated items out and put them away.  The rest of the food could wait.  I picked up my purse and keys, told the cats I'd see them in a bit, and left to go cross a couple more things off my list.

When I got home 45 minutes later the cats weren't anywhere to be found.  I sat at the kitchen desk and caught up on emails and Facebook posts.  By the time I was finished the cats were back.  Jackson circled around under my feet, and Pepper jumped up on the desk and walked across it a couple of times trying to get my attention.  I finished what I was doing, and told them I'd take care of them after I put the groceries away.

This was a small shopping trip, and everything (except for the gallons of milk) had fit into two large flat-bottomed cloth shopping bags. The first bag contained produce and miscellaneous groceries.  The second bag held a couple of boxes of cereal, some canned goods, and a loaf of bread, which I'd placed on top of everything else.

When I pulled the bread out, I noticed something wasn't right.  There's not supposed to be a hole eaten into the bag: 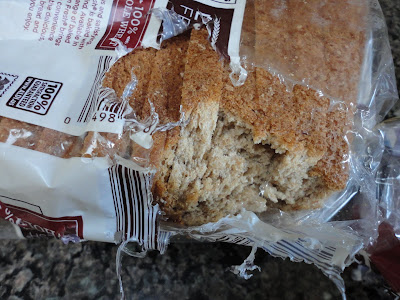 Who did it? As they always do, both cats looked at me innocently when I asked. I tried to figure out the message they were sending. Were they announcing they need more food, or annoyed that I ignored them?
Posted by Kathy G at 4:17:00 PM