Back in November (on the first Sunday of Advent, at the start of the liturgical year),  the Catholic church began using a new English translation of the Mass, which is closer to the original Latin texts than the one that came out after the Second Vatican Council in the 1960s.

When I walked into church that first Sunday, in addition to the Missals and hymnals in front of each pew there were cards outlining the new prayers and responses.  Since things had been the same for decades, I could say all the prayers by rote, so it's probably not a bad thing that I really have to concentrate now on what I'm saying.  When I started, I didn't have the new words memorized, so I read all the prayers.  Almost three months later I've committed some of them to memory and I'm gradually phasing out the sheet.

Most of the changes in wording are pretty minor, but there's one that continues to trip me up...and judging by the mumbling I hear from the people around me at Mass, I'm not the only one.  At five different points in the ceremony, the priest says, "The Lord be with you".  The response used to be "And also with you".   Now, its "And with your spirit".  The first few weeks I always said the old words.  Now I get it right more than half the time.

I had to laugh when I got this in an email today: 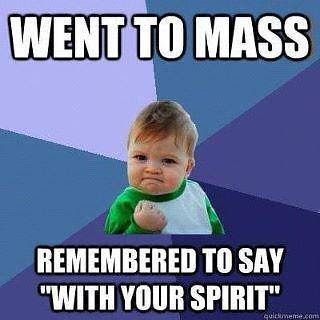